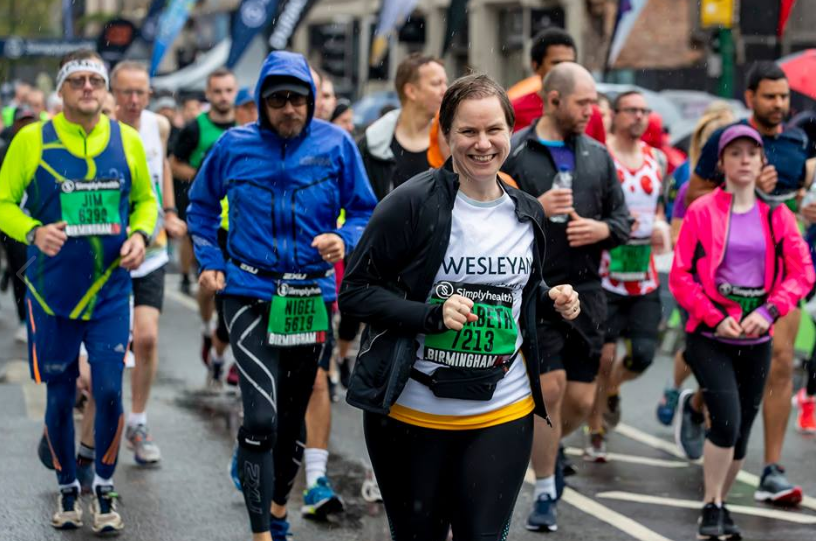 If you have an idea for a fundraising event, please contact us and we’ll be happy to support your endeavours.

It is easy to set up a fundraising page on Just Giving to handle online donations and Gift Aid.

An easy way to raise funds for Partnership for Children is to do your online shopping via AmazonSmile.

Here are some of the fundraising events that have been organised by our supporters:

Running in the rain

Partnership for Children Programme Manager Lizzie Poulton joined a team of runners from our corporate supporter Wesleyan doing the Great Birmingham Run. Despite torrential rain, all runners completed the half marathon course with over £1600 raised between them. First time runner Zoe Close from Wesleyan was delighted with her time and said “the crowds helped spur me on and despite the very wet run I enjoyed the whole experience.” Thank you and congratulations to the whole team!

Melanie Chell, a Partner at Shoosmiths LLP, took on the challenge of swimming the English Channel and the 11.5 mile length of Lake Windermere – no wetsuit, just Mel and the water. Due to the illness of one of the swimming team, she was unable to complete the Channel swim but two months later she swam Lake Windermere which she completed in just under eight hours. Mel raised over £2,000 for charities supported by the AF-PA.

The Asset Finance Professionals Association (AF-PA) organised a charity golf day on at the Verulam Club, St Albans. Seventeen teams including both occasional and semi-professional golfers took part. The winning team were Investec Asset Finance, with Clear Asset Finance in second place and Alfa Systems in third. Thanks to the generosity of the AF-PA, the event raised £5,000 for Partnership for Children. Special thanks also goes to Santander Asset Finance for sponsoring the goody bags, the Verulam Club for hosting the event and Alfa Systems for their additional charitable donation.

We were delighted to receive a cheque for £4,000 from Shrewsbury House School in Surbiton, Surrey. This amazing sum of money had been raised by the boys taking part in a sponsored run. Hannah and Wendy spoke to the staff and pupils at an assembly about the importance of good mental health. A huge thank you to all the pupils, staff and parents for their generosity.

Six wonderful volunteers joined the staff team to pack bags and raise money at the opening of a new Aldi store in Kingston upon Thames. Whilst we packed, we were able to tell people about our work and hand out Zippy Tips cards to children. Many thanks to everyone who gave money and all the volunteers who shook the buckets!

Steve completed an exhausting schedule of races to raise an amazing £2,012 in 2012 – two marathons, three half marathons, six triathlons, three open water swimming races and a 50-mile bike ride. He suffered injuries, was knocked down by a car and was sick after swimming in the River Thames, but he didn't give up until he reached his target!

Paul Rubenstein climbed Mount Kilimanjaro to raise more than £11,500 for Partnership for Children, the most successful individual fund raising effort in the charity’s history. Two years previously, he and his daughter Katie raised £4,400 with a sponsored parachute jump. ‘I just believe so firmly that PFC needs to survive, that it needs to grow,’ he says,‘and to do that it needs funds.

Dan Silas raised more than £1,700 for Partnership for Children by cycling from London to Paris. His five-day journey started at Greenwich in South East London. Together with 70 other cyclists, he headed for the port of Dover, crossing over to France on a ferry. After pedalling for five days, 70 weary cyclists arrived at the Eiffel Tower in the heart of Paris.